Interview With a Zen Master 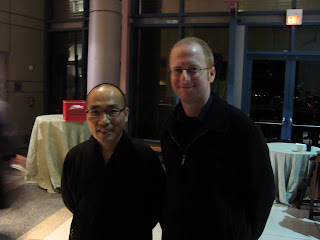 one hand claps
was that the ox?
then what have i been taming?
friends with the monkeys
will they still spook the ox?
let's see what happens

echoes of forgotten lessons
like drops of nectar upstream
unperceived, yet there

read this line
now this one
they can't be reread

kevin
I practice Soto Zen in the lineage of Shunryu Suzuki at Houston Zen Center where I will be spending four months practicing as a resident. (Any posts before May of 2012 fall under this profile.) What I write here is mostly me thinking aloud to process and record what I experience for my own benefit but I offer it to anyone else who may find it helpful.

"starting with what you have" is the concept of walking your path now, not putting it off until you think you're ready. Cooking the Dharma as referenced in the address is not about trying to concoct my own Dharma as a final result, but rather use it as an ingredient in my life.

The two concepts together are a reminder to me to cook my life with just the ingredients at hand and make the best of it. Tasting each and every flavor to its fullest, no matter how bitter or sweet. Each moment will be different, but the Dharma will always be a constant ingredient, changing the recipes for the way I deal with different situations life throws my way.

Stuff You Should Have Read Already

Please comment wherever you see fit. If I didn't want comments, this all would be written in a journal by my bed. I don't care how old the post is, I check for comments and will respond. Thanks for reading

Some Blogs I Read